At EHS Projects we encourage each other to get involved with charity events and fundraising, and many of our team have taken part over the past few years. As a challenge for 2017 we set ourselves a £1,000 fundraising target, though both individual and collaborative events. We are pleased to report our grand total was £2,420 in 2017! Some of the fund-raising efforts and events we have been involved in include:

•In October 2017 Richard ran a 10k muddy obstacle run through the fields and streams of Carsington Water, and thanks to generous donations from colleagues, friends and family raised over £300 for Wateraid.

• Jo took part in a charity wingwalk in June 2017, fundraising £310 for the Scunthorpe maternity hospital, who are raising money for a family bereavement unit.

• Cath ran her first half marathon in 2017, in the process raising £452 for Crohn’s and Colitis UK’s work funding research into inflammatory bowel diseases and improving the lives of people affected. 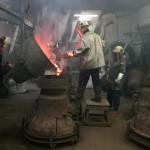 As a bellringer, Rosie is involved in fundraising for Sheffield Cathedral’s extra bell fund – the additional treble bell was cast in February 2017 the bell will be installed in October this year. The new treble will provide a light six, ideal for training new ringers, and a light ten, again more suitable for less experienced ringers. Rosie has directly raised £149.11, and also been involved with group fundraising events at the Cathedral.

• Sonia ran the 5K Colour Run in Manchester in July 2017 – described as the “Happiest 5k on the Planet”, a unique colour fun run that celebrates healthiness, happiness, and individuality. She raised £245 for the NSPCC.

• Steve took part in the One Step Beyond challenge to run 100k+ during the month of November 2017 – he has raised £453.70 for Mind The Mental Health Charity. 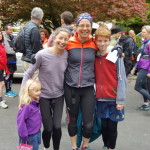 Jess took part in The Stanage Stumble in May 2017, a challenging 12 mile route with 10 hour time limit via the beautiful Limb Valley, Fox House, Stanage Edge returning over Redmires Moor to finish. She raised £510 for HomeStart, a South Yorkshire based charity supporting parents.